The hot-air balloon loses height uncontrollably and is in danger of colliding. To the best of your ability, you make a quick review of the situation; in order for other passengers to survive, one passenger must jump down from the hot-air balloon. The passengers are a promising cancer researcher, a pregnant elementary school teacher, and partner of the teacher, who is also pilot of the hot-air balloon. It is your responsibility to decide who will survive. How would you choose?

Choosing the least evil from several options is an everyday challenge that can cause negative emotions in individuals. Although in Klondike Annie -movie (1936) Mae West had a simple and effective vision for solving moral issues: “Between two evils, I always pick the one I never tried before”, reaching a solution can be challenging. In addition, in situations where decision-making is based on complex moral acquisitions people often tend to discuss these dilemmatic situations and choices in interaction with other people, which makes the situation even more complex.

In our study, we presented a fictional scenario, similar to one described at the beginning of the blog post, for two sets of pairs, consisting of both depressed and non-depressed individuals. Relying on the personal moral judgment of the participants is essentially linked to solving moral dilemmas: making suggestions, defending one’s own or views that are perceived as right, and opposing those that are perceived as false or reprehensible. The contents of these statements can evoke strong emotions in individuals, but they can also be reflected in physical reactions. For example, during proposals that suggested a victim or disagreed with a conversation partner, more intense changes were observed in the skin conductance than, for example, in proposals about rescuing a person.

Speakers can also increase the interactive power of statements with their gaze. When a conversation partner looks you straight in the eye and says “we can do this”, the contribution is much more powerful than when it is uttered looking at the walls. Eye contact is also easier to make when the topic of discussion is easy and less personal. When the topic is difficult or the speaker feels insecure or ashamed people tend to look away from the listener. Indeed, in our study, looking at the partner occurred most often when the speaker took a strong position to save the person.

While making a conversational contribution in moral dilemmas often entails speakers to put something of him- or herself “out there” for others to judge, and thus to submit into a vulnerable position, the contents of statements can play a significant role in how they affect an individual’s behavior and physiological reactions. Surprisingly, there were few differences between depressed and non-depressed people in our study, except for the gaze alignment. Thus, in order to create a better understanding of the affective corollaries of human social interaction necessitates a balanced consideration of both contents of talk and behavioral patterns.

The text is based on Koskinen, E., Tuhkanen, S., Järvensivu, M., Savander, E., Valkeapää, T., Valkia, K., Weiste, E., & Stevanovic, M. (2020). The Psychophysiological Experience of Solving Moral Dilemmas Together: An Interdisciplinary Comparison Between Participants With and Without Depression -article.

Joint decision-making in mental health: An interactional approach, edited by VOIS researchers Camilla Lindholm, Melisa Stevanovic and Elina Weiste, was published in June 2020. The book examines practices by which mental health professionals seek to engage clients in joint decision-making. It is also explored how these social inclusion efforts intertwine with subtle negotiations of power and expertise in different mental health service situations.

You can obtain the book here or by contacting the book’s editors via e-mail.

A total of 60 participants in 30 interaction pairs took part in the Vois-project experiment. Joint decision-making was studied via three tasks. During these tasks we measured the participants’ skin conductance, heart rate and gaze direction. 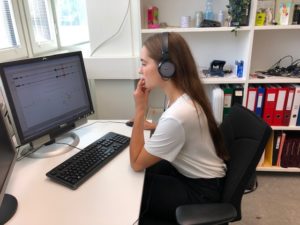 The experiments have been done and now it’s time for coding. 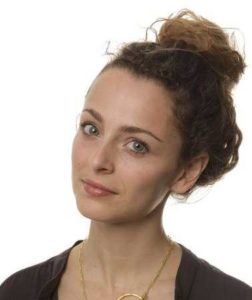 Last week we had the privilege of having Chiara Jongerius, a doctoral student from Amsterdam, visiting us. We introduced our project to her and she presented her doctoral dissertation research project in various sessions. At the end of the week Milla Järvesivu wrote down some of her thoughts about the visit.

Could you tell us a little bit about yourself and your interests?

“I am a doctoral student at the Amsterdam University Medical Center and the University of Amsterdam. My topic of interest is the doctor-patient interaction. Today, doctors are forced to use the computer during the consultation with the patient. In my research project we use mobile eye-tracking glasses to observe where the doctors are looking when they are in conversation with their patients. We want to examine if, for instance, the amount of eye contact between the doctor and the patient during the consultation has an influence on how much trust the patient has in the doctor after the consult. Eventually we hope to improve the communication between doctors and patients.”

“I met dr. Melisa Stevanovic in Verona, Italy, during an international meeting on psychophysiology. During this meeting Melisa presented about her research projects and I noticed that she was using very elegant methods to study interaction, such as eye-tracking. For my research project I also use eye-tracking, so when I saw that the Amsterdam Public Health Institute offered grants for travel opportunities I immediately applied to come to Helsinki to have a glance at the VOIS-project.”

How has your stay been? Has it lived up to your expectations?

“My stay has by far exceeded my expectations. The people that work in the VOIS-team have been truly welcoming. Helsinki also offers amazing food and a wonderful winterly landscape with lots of snow and ice. I feel very lucky to have visited your university.”

What has been the most interesting or memorable during your visit?

“I had the chance to present my research project to a group of experts from different fields during a seminar. I really enjoyed the challenging and relevant discussions that emerged and the thoughts that the researchers shared with me on my topics of interest. I will bring home new ideas to improve my research project.”

What are your thoughts on the VOIS project after the visit?

“The VOIS-project is a very promising initiative, offering new insights in mental illness and how it relates to social interaction. It is therefore relevant both for theory and practice. I look forward very much to hearing and reading about the results of the study!” 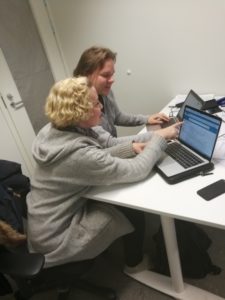 Samuel and Melisa presenting data to Chiara during a coding session. 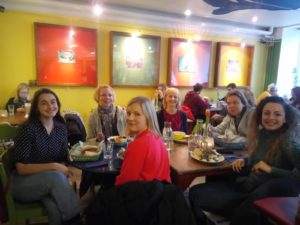 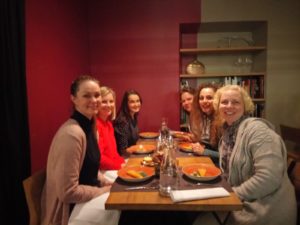 Members of the research team and Chiara having lunch and dinner.

Over the course of the early winter three new staff members have started in the project. Samuel Tuhkanen is a Doctoral Student in Cognitive Science focusing on the experimental part of the research project. Kaisa Valkia works as a research assistant and she’s conducting her Master’s thesis in Social Psychology in the project. Milla Järvensivu also works as a research assistant and is a Master’s student in Social Psychology. 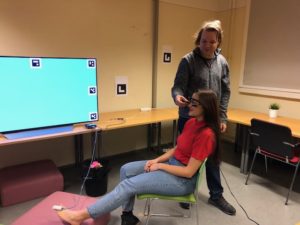 Samuel and Milla piloting the experiment. 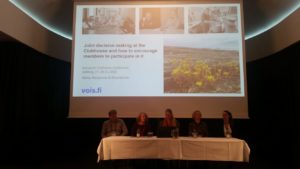 The formulation of proposals has an impact on participation: entirely open proposals are too challenging and closed proposals too restrictive. It’s best to operate between these two extremes. 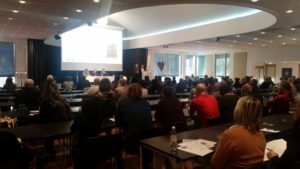 The big crowd consisted mostly of members and staff members. 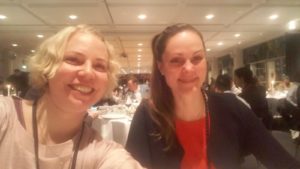 At the gala dinner there was dancing and good food. 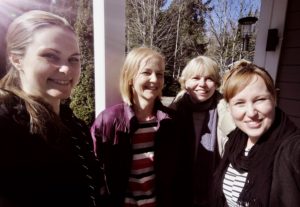 Which proposal forms are most responded by the rehabilitants? We are just about to find out.

Research team of our project has gathered in Loimaa to analyse the results from the transitional work couching group data corpus, collected from September 2016 to August 2017. At the moment, the regression model is running… 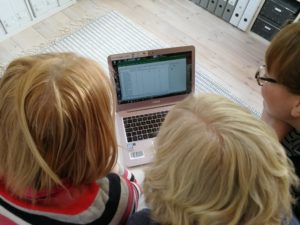